The newly formed N&E Committee started meeting back in February soon after the resignations of the former Exec board.  Since then we’ve met over a dozen times and most of those meetings have taken place since the current distance learning model took place in mid-February.

The committee is working the best we can to make sure all REA elections, whether REA-wide or at the building levels, are open to all, fairly run, transparent, and  consistent with the REA bylaws and procedures adopted by Rep Council, and void of any issues of impropriety.  Though challenging in these times, this is our objective at every meeting of the committee.

The N&E Committee worked with WEA staff and BallotPoint to conduct the March election of officers and Exec Board members, who were then immediately installed into office.

After the school closure in mid-March we had several meetings to talk through a system for the immediate election for needed building reps this May after adopting policies at Rep Council in April’s meeting. N&E examined the number of members at each worksite and determined the number of available rep positions using the 1:12 ratio of the bylaws. Having no past records showing which year the term of office of individual reps would expire, the Committee polled the current reps. Nominations were solicited three times using a Google Forms link. That process required balloting to occur only if the number of nominees exceeded the number of open positions. Only one building needed to take a vote, due to a low number of nominations. A number of rep positions remain unfilled at this time. Per the process adopted in April by Rep Council, member counts at each building will be reviewed again in September, and any new (or vacant) positions will be filled at that time using the election process.

The N&E committee were also tasked to collect nominations from the REA membership for the election of RUC board members for the 20-21 by the Rep Council at the June Rep Council meeting.

Here are some additional items being addressed by the N&E Committee as we continue to move forward:

Stipends - *Need to have roles outlined in bylaws for the expected duties for each of these positions.

Where are we, what have we done?

We looked for redundancy and looked at where there were contradictions in the bylaws and constitution and looking at making sure that language was where it belonged.

Questions we asked ourselves...

What is our progress?

We have finished our first go-through of the constitution. We will need to do a revision.
We are currently working on going through the bylaws. Then we’ll need to revise them.

Then we need to triple check the Hostack Recommendations. The Hostack report is a document from the NEA attorney’s that directed REA to make changes in our Bylaws and Constitution because:

We will then look at policies from other committees/groups like Nominations/Elections, Finance, ROC, etc.

Our committee is very transparent, if you would like to see the very rough drafts, we can make that available.

We also have room for 3-4 additional people if you would like to be a part of this important work. We’ll be working on it throughout the summer.

If you have any question, please email me joebento@gmail.com
Submitted 5/26/20
Joe Bento C & B Committee Chair 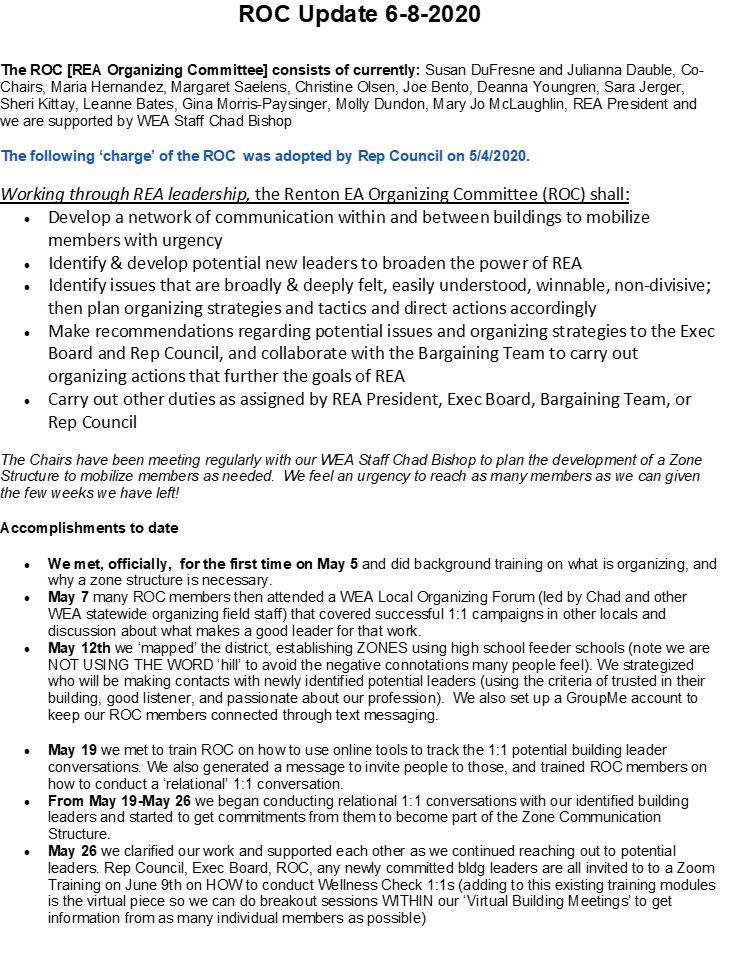 It is impossible to ignore the cold-blooded murder of a black man and the world’s response to a modern-day equivalent of a lynching. The police system in the United States was created based on the premise of white supremacy and the need to preserve white power. Racism is so entrenched in its history that the entire system needs to be dismantled.

There will not be one answer to fix all the things that this moment in history has amplified. Not just racial issues, but wealth inequality, education inequality and the unpublicized systemic racist housing policies that have kept people of color in a generational cycle of poverty that began with slavery and continues to this day with restrictive housing and banking policies.

I am at a loss for words in trying to express my thoughts on all that has taken place in the last two weeks. I will continue to listen, learn, and reflect on the racial biases that are present in my own life. I will be active in pushing for change in a legal system that more frequently incarcerates people of color, and I will push for true education reform for our children in poverty.

Building Rep Stipend Distribution: Being as we are not able to meet in person, a different method of delivering your well-earned stipends was developed. Bradley, Miriam, and I will be setting up a time for you to come to the KEC parking lot to pick up your honorarium. You will need to sign a sheet saying that you received it so it would be great if you had your own pen handy. I do not have the date and time as I write this report but will make an announcement at our council meeting. The other change we made to the stipend policy for this year only was to reduce the number of required meetings from seven to five. If you attended less than five meetings this year, you are not eligible for the stipend.

Grading: REA expressed concern that the only official information from the district to teachers, students, and families, was a single letter from Dr. Pattenaude. The letter laid out grading guidelines with grades ranging from A-D and Incompletes instead of F’s. The Guidelines also indicated that teachers should “do no harm.” These guidelines were then modified and changed school by school, and department by department.

We raised the ethical issue of expecting teachers to abandon all their previously established grading protocols and standards-based expectations.

We expressed disappointment that the district leadership was unable to provide a grading system that was legal, clear, and uniform for the entire district. We also let leadership know that resolving incompletes next year is a serious workload issue and to use this “threat” to diminish a teacher’s ability to give an incomplete was unacceptable.

Moving forward, we are hoping that leadership sends out a letter that, at the very least, will express their understanding of the challenging and unsettling circumstance this ever-changing grading protocol has put teachers in.

Certification Training/Online Classes: The last page of the documents file I sent out has the WEA flyer and registration link for the final series of WEA certification trainings for the school year.

End of Year Building Rep Meetings with Members: I am asking each building’s reps to hold one final online meeting with their building’s members. I will send out a sheet of talking points as well as a list of the teachers in your buildings who are not members. Maybe you’ve reached out to these teachers and they have not been interested in joining. With the uncertainty about what school will look like next year, being a union member would allow them to vote and have a voice in the decisions that we will be asked to make. It would also provide an insurance benefit in case there are legal action by parents regarding the many different technology platforms used throughout the district for instruction this year.